Deprecated: implode(): Passing glue string after array is deprecated. Swap the parameters in /home/customer/www/prospectcreations.com/public_html/plugins/content/jw_allvideos/jw_allvideos.php on line 73

Deprecated: Function get_magic_quotes_gpc() is deprecated in /home/customer/www/prospectcreations.com/public_html/libraries/f0f/input/input.php on line 102

When I was a young child, I had the curiosity of painting. My mother brought me to a very special academy, which was monitored by Heriberto Zorrilla, who was my mentor and my inspiration and from that time to many years later when I again felt the need to paint with the memories of his method “The sensible Line”.

I would like to tell that behind every picture there is story which was created without any intention and became alive with the observers glance.

My mentor, Heriberto Zorrilla, is a great person who, with his wife Helena have created a new artistic painting movement called “Essentialism “known over the world. They have their painting workshop in Buenos Aires, where nowadays they impart their knowledge in their painting class.

How to develop the production process of my paintings?

The working method is based on a random starting point, I call it the graphic stimulus. Where is this stimulus is based?  First I set up the support (paper, canvas, etc.) for the 'sensitive line". This was achieved by a path in which I do not purposely draw a specific line, without project, with slow stroke but on condition that in doing it I feel the thrill of doing it.  The registry of that line will record the changes in my stroke. It is an expressive record that will show an irregular, organic line.

The vision of this sensitive line will move from my interior, a series of images suggested to which I will try to define and achieve their forms. These images are always incomplete and my desires can determine to add what I know from them. Then, I intervene with the colour in an intuitive manner and responding to my preferences of the moment.

These studies suggest that the act of painting and drawing is a creative experience.

“The picture has to be a vital fact.” - Heriberto Zorrilla

"The true work of art is born from the Artist: a mysterious, enigmatic, and mystical creation. It detaches itself from him, it acquires an autonomous life, becomes a personality, an independent subject, animated with a spiritual breath, the living subject of a real existence of being." -Wassily Kandinsky

Deprecated: implode(): Passing glue string after array is deprecated. Swap the parameters in /home/customer/www/prospectcreations.com/public_html/plugins/content/jw_allvideos/jw_allvideos.php on line 73 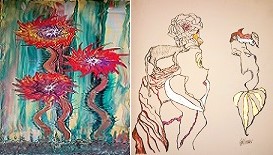